WRITING IS NOT GLAMOROUS! 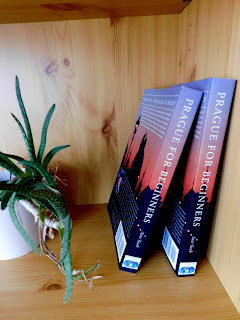 A while back, when we lived in Prague, we went to Poděbrady for a few days. My friendly husband met some people who were looking for the best spring in a town full of springs. He led them to his favorite, then brought them back to our hotel cafe for a drink with us in the sunshine.
As we chatted, one of the woman asked what I was doing in Prague. I told her I am a writer. Her eyes got big and round, and she said respectfully, "that's so great!" and asked what I was working on.
Back then, I was writing my novel about a young woman teaching English in 1994 Prague, called Prague for Beginners. I published it in 2016, and you can find it on Amazon: https://www.amazon.com/Prague-Beginners-Finding-Myself-ebook/dp/B0120UGDL2

Although I was pleased at her reaction, I was also a bit embarrassed to admit what I am. Being a writer causes peculiar habits in the way I relate to the here-and-now. As I am living a moment, I am also writing about it in my head. I actually see the words, lik…
Post a Comment
Read more

Seven things for which I am thankful to Prague 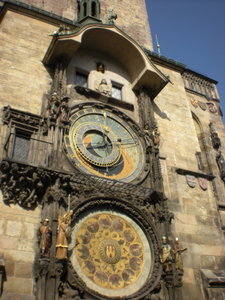 I have had a family-based relationship with Prague since 1990 and lived there full-time with my Czech-American husband from 2010 to 2013. We visit Prague every summer to keep in touch with family and friends, and will be returning in Summer 2020. Even after all these years, this city is still a mystery to me on many levels, but I can say that I am thankful to Prague for seven reasons.1. Prague is beautiful. Of course it is. But then, many cities have places and buildings that are monumental, gorgeous, dignified, breath-taking and awe-inspiring. It's just than Prague has so many of them, and they are spread out all over the city. There is the Old Town (stare mesto)
Then there is Mala Strana: 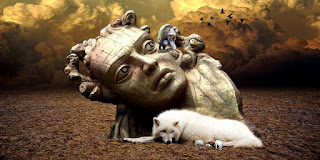 I met a traveller from an antique landWho said: “Two vast and trunkless legs of stoneStand in the desert . . . Near them, on the sand,Half sunk, a shattered visage lies, whose frown,And wrinkled lip, and sneer of cold command,Tell that its sculptor well those passions readWhich yet survive, stamped on these lifeless things,The hand that mocked them, and the heart that fed:And on the pedestal these words appear:‘My name is Ozymandias, king of kings:Look on my works, ye Mighty, and despair!'Nothing beside remains. Round the decayOf that colossal wreck, boundless and bareThe lone and level sands stretch far away.”
This poem is not about Prague, not written by a Prague poet.
But I like the imagery of pride followed by a "colossal wreck" and can imagine such a statue tucked away somewhere in Prague.
Post a Comment
Read more

MOST AMAZING CASTLE IN the CZECH REPUBLIC (Honest Guide)

Elizabeth’s Prologue to Prague for Beginners 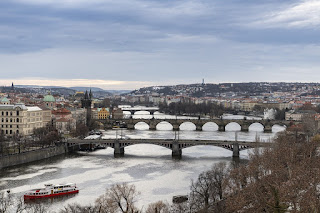 "By the time I got to Prague in 1994, all the best things had been already claimed.
Gone were the breathtaking, dirt-cheap, grand old flats on the river, the greatest decent-paying jobs as journalists and consultants to politicians, and the ground-breaking cross-cultural adventures in Czechoslovakia after the abrupt and peaceful departure of the Communists who had ruled since 1948.
But I came anyway, quite ignorant of what Prague was really like. As it turns out, I was equally ignorant of what I was really like, even though I was 34 years old and should have known better. What I found in Prague and what I learned there caused me to rethink my whole life. I was teaching English to beginners, but I was a beginner myself. Here is my quest to discover why I was in Prague." 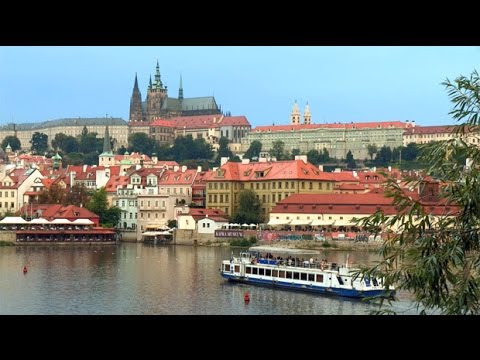 A POETIC GUIDEBOOK TO PRAGUE by Stephan Delbos 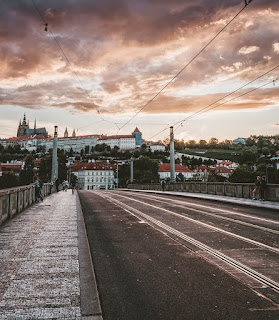 “It’s designed basically as a poetic guidebook to the city of Prague.

Literally it’s a collection of 120 poems covering 1888 to 2010, all translated into English from 16 languages, and all poems about Prague or taking place in Prague.”

Sara Tusek
Sara Tusek is an educator and writer. Her novel Prague for Beginners draws on Sara’s experiences and observations of visiting, living, and working in Prague since 1990. She is the Executive Editor of International Leadership Institute Publications, a publisher of books, articles, educational materials, and reports aimed at inspiring and assisting people in the areas of international leadership and career development, improvement of English language skills, and the political and economic changes of the 21st century. Sara directed career services at a private Tennessee university, taught English and Writing on the college and secondary school levels in 10 schools and universities, and worked with thousands of foreign students in their pursuit of excellence in American English, helping them establish themselves in international careers. Currently, Sara provides college prep consulting services in writing and reading in American English and teaches Writing at a Florida college. With Jarda, she delivers Reinventing your Future workshops.